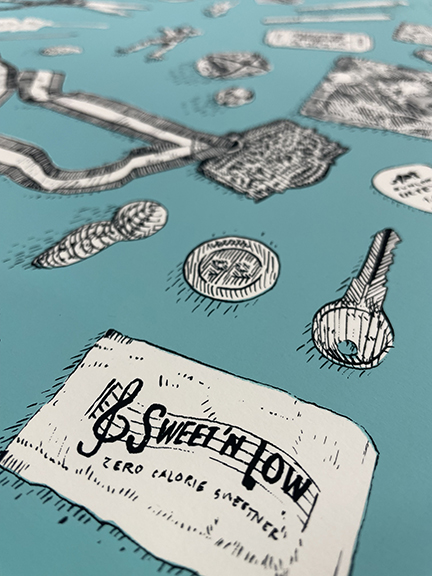 Last year the Trout Museum of Art invited me to install my piece What You’ve Got as part of their Community Arts program. The piece was up for two weekends outside the museum where the city of Appleton hosts a farmers’ market.

Months later, I received from the TMA a box full of the things people traded for seedballs. I sorted through the items, documented them by categories, and picked out my favorite ones for a “portrait” of the crowd who took seedballs.

Beginning in October, I made gouache paintings, at a life-sized scale, of each item. The gouache paintings served as guides for me to draw the pieces in opaque ink on drawing film. I used the finished film to burn a screen of the image and printed several copies. The resulting two-color screenprint documents some of the items from the installation.

I think most people who engage in representational drawing and painting have to grapple at some point with why we do that. What is the point of spending so much time to render something faithfully when the camera can do so almost instantaneously and with mathematical fidelity to the reflected image? For me, the answer has everything to do with the slowness of the process and the “voice” of the translation. Or maybe I just like to get lost in drawing. At any rate, sitting down to study these objects, draw them, paint them, and then simplify them in the inking process was a helpful balance to the ongoing weirdness and grief of this COVID-y year.

1 thought on “What They Had”